A Brief History of Gunnersbury

Read on to find out more about the fascinating history of Gunnersbury and the people who lived here.

A good starting point for the history of Gunnersbury is the late 7th century, when the Saxon Kings of Essex were establishing a new Christian Bishopric and Cathedral for London. The Bishop of London was endowed with the Manor of Fulham, a vast west London estate administered from the Bishop’s Palace through local manors (a form of sub-contracted management and tax collection). Within it, Gunnersbury is first recorded in 1347, and a description of it around 30 years later is of a small estate of both arable and pasture, in a rather run-down condition.

For the next 200 years it was held by the Frowykes, a family of London merchants and lawyers. There would have been a manor house, which may possibly have been near to the junction of today’s Popes Lane and North Circular Road. Archaeological evidence suggests it may have been enlarged and upgraded in the late 15th century, as fashionable brick and tile was replacing timber and thatch.

This was the estate acquired by John Maynard during Cromwell’s Protectorate in the mid-17th century. Maynard was a successful lawyer from Tavistock who had been called to the bar in 1626. He practiced in the West Country and in the courts at Westminster Hall. His wife Elizabeth (the mother of his children) died in 1655.

Maynard’s second wife, Jane, was wealthy in her own right. By 1658 they were transforming the estate by building a mansion in the Palladian style and laying out a new walled garden. With 44 hearths, it was the largest house in the area, even visible from across the river in Richmond. It stood until 1800.

Maynard’s will was so complex it took nearly 50 years of court cases and Acts of Parliament to settle, and the estate was in a run-down condition by the time it was bought by the merchant Henry Furnese, MP, in 1730.

Furnese was fashionable, aware of aesthetic trends and a wealthy collector of pictures. His first actions in his garden were to try to make the walls of the terraces more authentic, but very soon he followed the new trend of shaping a more natural landscape by opening up to the west, converting farmland into parkland, constructing the Round Pond and Temple, setting up a new walled kitchen garden, replacing the terracing with sloping lawns and water and adding some garden buildings (now lost) around the new perimeter wall.

It was this estate which Princess Amelia bought in 1762. She added the shell grotto and a chapel. She may also have added “The Mews” to the forecourt - for 14 horses and 7 carriages. 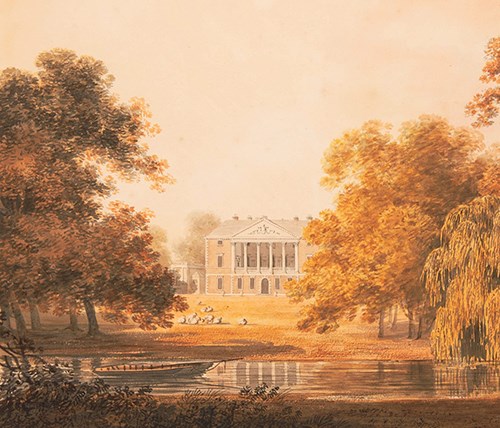 Maynard's Palladian mansion seen from the south, in a watercolour by William Payne, 1792.

The Round Pond seen from the Temple, watercolour by William Payne, 1792. The Pond was used to keep fish for the kitchen 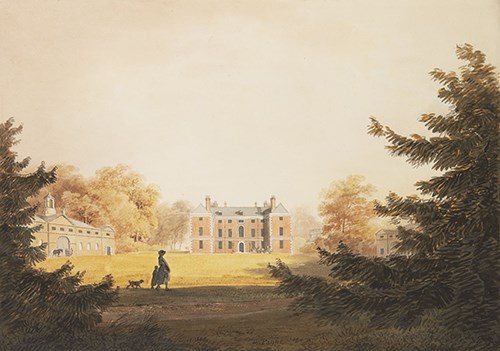 The north front of the mansion with stable and service wings, seen from what became Popes Lane, watercolour by William Payne, 1792

In 1800 this large estate was bought for development – the mansion demolished, its materials sold, and the parkland divided into 13 plots for fashionable villas.

Gradually the estate was re-assembled by Alexander Copland, a wealthy Scottish builder, save for one plot bought by Stephen Cosser, a timber merchant whose yard was close to Copland’s in Westminster.

Two new villas were built in 1802 – Gunnersbury Park House for Copland (today’s Museum) and Gunnersbury House for Cosser. Both estates were walled around. Copland laid out the Italian Garden behind the Temple with a circle of planting and basket beds.

When Nathan and Hannah Rothschild bought Copland’s estate in the 1830s, they added the Orangery beside the Horseshoe Pond and the Stables beyond their neighbour’s south wall. They also re-modelled their mansion. Under the Rothschilds the farm building on the west side of the estate was converted into a thatched ornamental farm.

Cosser’s villa went through a number of owners and was enlarged and remodelled, particularly after a major fire, until it too was acquired by the Rothschild family in the 1880s. 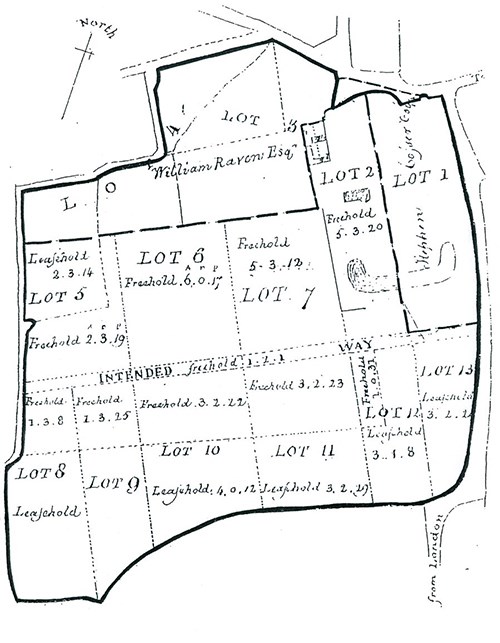 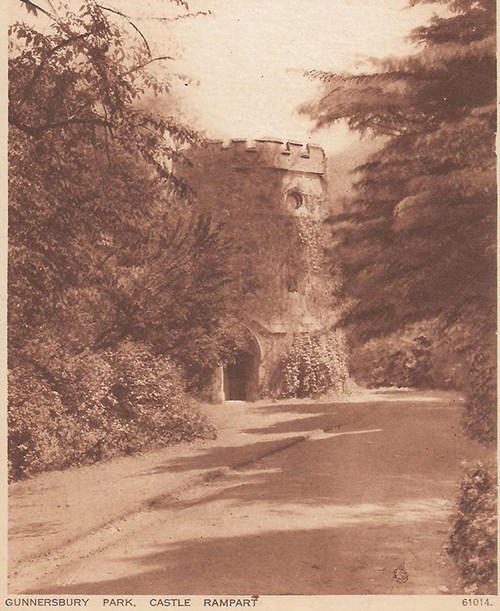 1930s view of the Potomac Tower, originally the kiln for the Brentford Pottery

The wall between the estates was demolished – it is now a main tree-lined path. Both estates invested heavily in horticultural improvements, and both head gardeners remained employed even after the merger.

The estate was also greatly enlarged to the west by the purchase of Brentford’s Common Field and the clay pit and pottery which were converted into the Potomac Lake and Tower.

The 18th century perimeter wall was demolished and a new carriage entrance and gatehouse was built in the south-west corner.

Leopold de Rothschild died in 1917. His son Evelyn, who would have inherited Gunnersbury, died in the same year fighting in Palestine.

The planned Great West Road would change the area, and the estate was becoming neglected.

Despite the pressure for house-building, the Boroughs of Ealing and Acton thought Gunnersbury would make an ideal public park and invested in converting it for 13 different sports and recreation activities, hoping the income would reduce the cost of maintenance.

The Boroughs of Brentford and Chiswick joined in soon after. The grand opening ceremony was on the 21st May 1926. 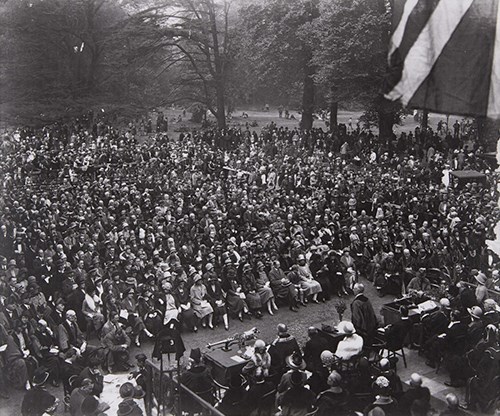 The crowd watching Neville Chamberlain MP opening the Park, with the press and a cameraman in attendance alongside the dignitaries