Queer Stories from Ealing and Hounslow

In this first of two blogs, curator Amy Dobson shares some of the stories of local LGBTQ+ people from Ealing and Hounslow who have made history.

Lesbian, Gay, Bisexual, Transgender and Queer (LGBTQ) Pride Month is celebrated globally each year in the month of June to mark the 1969 Stonewall Riots, a series of demonstrations which were carried out by members of the LGBTQ+ community in response to a police raid which occurred at the Stonewall Inn in Greenwich Village, New York. The Stonewall Riots were a tipping point for the LGBTQ+ rights movement, and paved the way for annual Pride celebrations that now take place in hundreds of locations across the world.

The purpose of Pride Month is to recognize the impact that lesbian, gay, bisexual and transgender individuals have had on history locally, nationally and internationally. Ealing and Hounslow have a rich and diverse LGBTQ+ history ranging from musicians and actors, to authors and architects.

E.M. Forster was an English novelist, best known for his novels A Room with a View, A Passage to India, and Howards End.

Forster moved to Arlington Park Mansions in Turnham Green in October 1939. He moved partly to escape central London following the outbreak of the Second World War, but also to be closer to his friend and lover Bob Buckingham who lived in Shepherd’s Bush. Forster occupied a top floor flat at Number 9 which had ‘a lovely view over Turnham Green’ where he lived until his death in 1970. 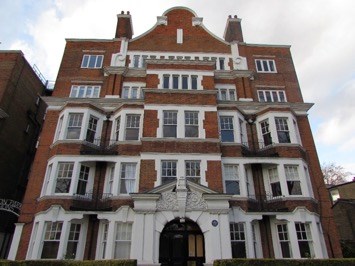 His only gay novel, Maurice, was a tale of homosexual love in early 20th century England and follows Maurice Hall from his school days through university and beyond. It was not published until 1971, 18 months after his death. Forster apparently thought publishing it would be too controversial while homosexuality was illegal.

He documented in his diaries of having several affairs with men throughout his life– two of whom were policemen, Bob Buckingham being one of them. They met in 1930 at a party on the day of the Oxford/Cambridge boat race. The pair immediately clicked and began a lifetime on-off affair. Buckingham later married a woman, May, whom Forster grew close to as well, and a relationship was built on the two of them ‘silently sharing’ Bob Buckingham. May Buckingham took care of Forster towards the end of his life and was with him on the day he died.

He died in 1970, 3 years after the decriminalization of homosexuality. One poignant entry in his diaries said: “Now I am 85 how annoyed I am with society for wasting my time by making homosexuality criminal. The subterfuges and the self-consciousnesses that might have been avoided.”

Born as Faroukh Boulsara, but known since childhood as Freddie, his family fled their home in Zanzibar in 1964 during the political revolution and sought refuge in England, settling in to 22 Gladstone Avenue in Feltham.

As a teenager in London, and unsure of what to do with himself, Freddie enrolled himself on to a two year arts foundation course at Isleworth Polytechnic. He gained an A-level in Art and went on to study fashion design at Ealing Art College. Barely a year in to the course however (of which there were only 2 men out of 32 students on the course!) he switched to studying graphic design. It was this switch in course that led him to meet a friend of a friend, Brian May. May was in a band called Smile, alongside drummer Roger Taylor. Freddie was desperate to get back in to music, and when Smile broke up in 1969, Queen was born.

Queen were known for their stadium rock and spectacular performances which were dominated by Mercury’s energetic and flamboyant stage presence.

Offstage however, he was a private and even shy man. He was secretive about his roots in Zanzibar and never publicly stated that his sexuality. But despite never having in-depth discussions about his sexuality with the public, it was well known that he had relationships with both men and women. In the 1970s he entered in to a relationship with Mary Austin and they lived together for several years before he announced to her that he was bisexual. They maintained a very close relationship however – he referred to her as the love of his life and left the bulk of his estate to her in his will. He also dated a number of men, his last partner being Jim Hutton who was with him until his death from bronchial pneumonia resulting from AIDS in 1991.

Earlier this year, a street in Feltham was renamed in honour of Freddie Mercury and unveiled by his sister Kashmira. The sign is placed outside the World Zoroastrian Organisation’s head office, a faith group into which Freddie was born and remained up until his death.  The WZO is now housed at 1 Freddie Mercury Close.