Black History Month is celebrated every year in October, and has been a celebrated event nationwide for over 30 years. It was originally founded to recognize the contributions that people of African and Caribbean backgrounds have made to the UK over many generations.

In this blog we celebrate just a few names from the local area.

Darren Panton was the first black male to graduate from the Royal Ballet School.

Born in Chiswick in 1976, he later moved to Hounslow as a child and attended Wellington Primary school. After watching the 1980 film ‘Fame’ he developed a love of tap dancing and began performing as a singer at the age of 6. A year later, Darren began dancing with the Irene Tempest School of Dance and by the age of 8 he successfully auditioned for the exclusive Junior Association of the Royal Ballet. 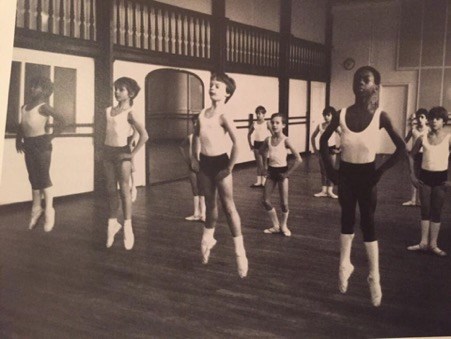 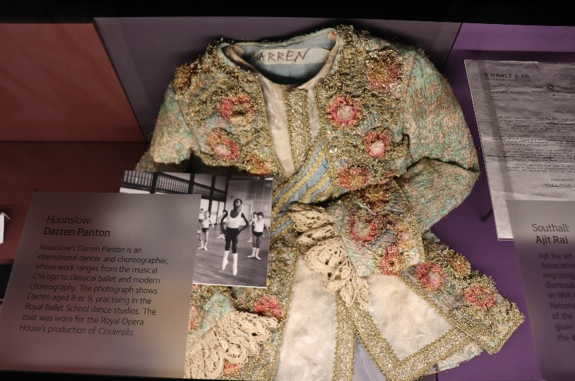 Over the following 8 years he trained at the Royal Ballet School and Upper School and was selected every year for the Royal Opera House school performance. Darren was the first black male to graduate from the school, and during his final year he had a piece choreographed for him by Anatolie Gregoriev of the Kirov Ballet.

Since leaving the school, Darren has had a varied career in dance and choreography from performing in West End musicals to working with artists such as Usher, Diana Ross, Elton John and Kylie Minogue.

Alongside his performing and choreography career, Darren worked to build strong relationships between professional working artists and the community and has been an important role model at the Royal Opera House, The Place and the Greenhouse Charity organisation.

On display in our People and Place Gallery, we have the coat that was worn by Darren Panton during the Royal Opera House’s production of Cinderella.

Eric and Jessica Huntley were born in what was then British Guiana and moved to the UK in the 1950s. They quickly became active in many of the social and political issues that related to the British African-Caribbean community in and around London. Together they were involved in a number of significant grassroots campaigns including the Caribbean Education and Community Workers Association (CECWA), the Black Parents Movement (BPM) and the North London West Indian Association (NLWIA). They were also supporters of the Supplementary School Movement which was created to supplement the shortcomings of an education system that was failing Black children.

The Huntley’s publishing company Bogle-L’Ouverture was one of the first Black-owned independent publishers in Britain.

Eric and Jessica Huntley were the organizers of the 1981 Black People’s Day of Action march that attracted 20,000 black Britons from all over the country and was the largest protest march of black people in Britain.

The Huntley Archive is now held at the London Metropolitan Archives and since 2006, an annual ‘Huntley’ conference has taken place there. Jessica Huntley died in 2013, and Eric Huntley continues to be involved in the annual conference, public speaking and personal writing.

Jamal Edwards was born in Luton and grew up in Acton, attending Acton High School before going on to study at Ealing College and receiving a BTEC Diploma in Media Moving Image. At around the age of 15, Jamal began rapping under the name of SmokeyBarz and would film videos of himself and friends from his estate to upload to his YouTube channel. It was from here that he set up the channel SBTV. His videos and following grew in popularity over the years and the channel became a focal point for new and emerging grime artists.

Through his SBTV platform, Jamal Edwards has helped launch some of the  biggest music artists in the UK such as Stormzy, Emeli Sande, Rita Ora, Dave and Ed Sheeran.

In 2014, he was awarded an MBE in the New Years Honours list for his work in music and his business SBTV.

Aside from his work in the music industry, Jamal Edwards’ most recent venture is in giving back to his local community. In 2019, he founded Jamal Edwards Delve (JED) after securing funding from Google and the Wellcome Trust. JED is a grassroots youth project that aims to provide young people in Ealing with opportunities to learn, work and connect through music, media and sports sessions. He has refurbished and reopened four youth centres across Acton.